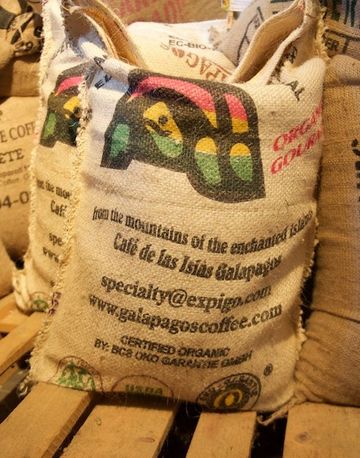 In 1879, Manuel J. Cobos together with French agronomists planted the first coffee trees on the isle names Chatham, known today as San Cristobal. They did plant the arabica variety Bourbon. These same plants are still producing fruits of excellent quality. Because of the typical micro climate and the fertile volcanic soil, no fertilizers nor pesticides etc are needed, and the use of these is indeed totally forbidden in order not to destroy the balanced ecosystem. The coffee trees grow under shade trees like avocados, guaves, oranges etc. Coffee is being harvested twice a year.

HISTORY OF “GALAPAGOS COFFEE” – THE PLANTATION…
On February 12th 1832 Colonel Ignacio Hernandez took possession of the Galapagos Islands in the name of the Ecuadorean Government. These rocky edges, the studying grounds of Charles Darwin, attracted numerous scientists, naturalist and other adventures over the years, like Herman Melville , writer of “The Enchanted Islands” and “Moby Dick”.

San Cristóbal, one of the largest islands that constitutes the Galapagos Archipelago, is the only one that enjoys an abundance of fresh spring water. Small rivulets fed up by the humid soil of “El Junco”, a volcanic crater lake, which lies 1.350 feet above sea level, flow gently down the rocky slopes on the island’s sun drenched southern side. This mineral rich spring water keeps the rich volcanic soil moist and fertile, bringing life to the island.

The misty interior and sea currents like the warm of Panamá, cold of Humbolt, enhance the vegetal diversity of this unique island.

El Junco Lake, San Cristobál Island
In 1866, don Manuel J. Cobos first owner of the island, was searching for a business that would satisfy his interests. He focused first on orchilla and from 1879 on sugar cane and coffee as the most promising avenues for his talent. Embarking of his new venture with the enthusiasm of youth, he imported coffee seeds from the caribbean french colonies through Panamá. Not satisfied with just any coffee, don Manuel settled on the ARABICA BOURBON type as having the characteristics that most fitted his idea of what a good coffee should be.

He planted initially 100 hectares ( 250 acres) of ARABICA BOURBON coffee on “El Cafetal” of Hacienda “El Progreso”, on San Cristobal Island. The plantation is situated between 450 and 1200 feet above sea level, which micro climate equivalent is 1,350 to 3,600 feet above sea level on the mainland. This elevation and weather is ideally suited for the growth of strictly hard bean, good acidity coffee.

"Puerto Chico" view, (now Baquerizo Moreno), San Cristobal Island 1900.
It was the key to high level of quality that formed the foundation of the enterprise that entered the world’s coffee trade as “Empresa Agrícola Pecuaria”

As times changed and the world’s coffee industry evolved towards a more oriented business to commodity good; the small, quality conscious coffee plantation fell on hard times and was eventually abandoned as unprofitable.

By 1990 the Gonzalez-Duche family purchased Hacienda “El Cafetal”. Intrigued with the Hacienda’s history and realizing the unique opportunity presented by the micro climates created by the Humboldt cold current and Panamá warm current, the intense equatorial sun and the dramatic climate changes that occurs as short altitudes increase ( 40ºC or 100 degrees at sea level, desert soil and 15º or 50 degrees at 900 feet with richest fertile soil). The horizon of Speciality coffee in the world appeared.

The Gonzalez family began the renovation of Hacienda “El Cafetal”, with many local workers, like Carmelita Palma, Oscar Ríos, Yobane Castillo and others under supervision of “the colombian” Gustavo Gómez, David Vinueza, Xavier Mata; converting the coffee plantation in an ecological, organic and sustainable farm and touristic atraction, proud of Galapagos Islands.